Figures of Speech or Rhetoric is one of the important literary device in English  literature, also they serve the purpose of making the English language more beautiful .

So here we write a short note about what is "Rhetoric" and "Figures of Speech" and their origin and then we discuss about various figures of speech and their use in sentences and in the field of literature...

Figures of Speech with Meaning

The term, Rhetoric comes from the Greek word RHETOR meaning a public speaker.

The word actually means the art of the orator and it's object is to teach the composition and delivery of speech for the purpose of moving the feelings of others.

The word RHETOR is now generally used to mean the whole art of graceful and effect composition whether spoken or written. 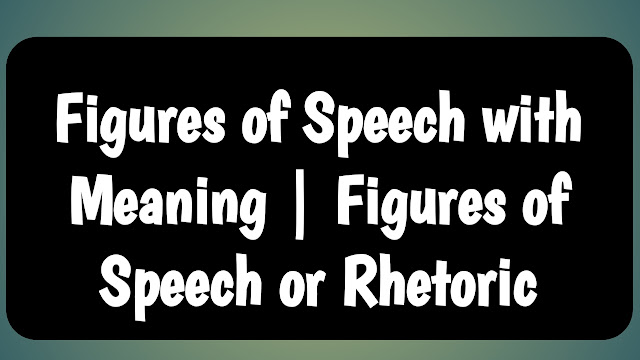 For this sort of effective composition, rhetorical ornaments known as "Figures of speech" .

The second meaning of the word refers to the remarkable actions with which a man stands out. To use it basically a departure from the plain and ordinary way of speaking out or expressing an idea for the sake of greater effect.

Through a sentence we use a particular figures of speech.

There were various figures of speech in English language. They serve the purpose of making the language  more beautiful .

Figures based on SIMILARITY :

The word SIMILE come from the latin "SIMILIS"    meaning "likeness".

When two dissimilar things / objects are compared to one another and the comparison bis stated, it is a Simile.

One must remember two important points signified with a simile :

I) The things or actions must be different.

ii) There must be a point of similarity between this two different things  , there will be such words as 'like' ,  'so' ,  'as' to serve as the connecting link.

There are two different kind of Simile

'Metaphor' , the word has come from the Greek words 'Meta '  meaning change and Phero meaning ' I bear'.

Hence Metaphor means a transfer of significance. By this figure a word is transferred from the object to which it belongs to another object, in such a manner that a comparison is implied, though not formally expressed.

A Metaphor is often called an implied simile while a simile is called an expanded metaphor.

1.  The news you bring is a dagger to my heart.

3. His crypt the clondy canopy.

4. The gulls are sailing in the blue.

This is an example of Metaphor.  A Metaphor is an implicit statement or implied comparison between two very dissimilar things. In this sentence two dissimilar /different things /objects. 'Life'  and 'a walking shadow'  are implicitly compared to each other.

It is more close to 'personification' than to 'metaphor' .

In personal metaphor personal attributes are transferred to inanimate objects and an adjective is also attached to it for the purpose of conveying human feelings.

5.   That to the sleeping woods all night singeth a quite tune

Here the term 'woods' has been said to be 'sleeping ' which is an adjective. The woods are invested with human qualities and feelings.

An ALLEGORY literally means a speech having a meaning other than the literal one.

An Allegory is a figure by which a length and detailed comparison is made between two un- allied subjects for the purpose on conveying some moral instruction.

The word Parable has come from the Greek words "para"  meaning 'beside'  and 'beallo' meaning 'I throw ' .

A 'parable'  is an allegorical story meant to enforce some high moral or religious lesson as is found in 'The new testament ' .

The parable of the good Samaritan.

Fable -  A fable is a short fictitious  story with a moral.

Here the irrational animals are general introduced as is found in Aesop's Fable.