Magic Realism is a term that is often applied to Beloved which according to the British critic David Lodge, applies to fiction 'when marvellous and impossible events occur in what otherwise purports to be realistic narrative '.

Lodge associates it with writing about issues that are somehow to difficult to address in conventional,  'undisturbed' realism observing that may employ it to depict profound personal or social trauma. Lodge also notes that magic realism appears to lend itself to the treatment of subjects that defy logic or that seem to horrendous to tackle in a straightforward way.

Magic realism seems right for a subject such as the Holocaust, for instance, as can be seen in the work of writes like Jonathan Safran Foer, David Grossman, and D. M. Thomas, or for the absurdities of totalitarianism notable in the writing of Milan Kundrea. Similarly the nature of Morrison's subject in Beloved seems appropriate for a ghost story : what better way of exploring  a trauma that will not die but which needs to be dealt with?

Indeed, what better way of addressing a subject that seems impossible to square with our understanding of our fellow human beings should be treated? In a sense Morrison uses something beyond belief in Western culture, a haunting, to represent something else that seems beyond belief in the modern world : the institution of Slavery.

Magic realism features more in some countries literary histories than others, and this might in past have to do with differing cultural attitudes to magic. In some cultures distinction between reality and the supernatural are less well defined than in others. African Culture is one that embraces magic. For instance and such traditions and attitudes also became part of African American culture.

"We are a very practical people, very down to earth, even shrewd people. But within that practically we also accepted what I suppose could be called superstition and magic, which is another way of knowing things. But to blend those two worlds together at the same time was enhancing, not limiting. And some of those things were ' discredited knowledge ' that Black people had discredited only because Black people were discredited and therefore what they knew was 'discredited'.

Morrison herself was raised in a family that had some feeling for the supernatural. Many of the tales she heard as a child were ghost stories, for instance, and her parents and grandparents had a belief in the spirit world. For Morrison so called Magic and superstition seems to offer an additional way of understanding that does necessarily negate conventional ways of thinking, but complements and even arguments them. Morrison feels that magic and superstition were 'discredited' because they are associated with black people ;  black people were considered inferior as a race and so their culture and philosophy were dismissed by extension. This dismissal also has to do with the fact that the supernatural cannot be reconciled with post - Enlightenment rationalism and the kind of assumptions that inform western thinking. The Enlightenment privileged reason and because this cannot account for magic it has a history of being rejected and ridiculed in the West.  Where Realism is compatible with western thought, then magic is not.

In terms of the relationship between Africa and the West, there is a sense in which these terms and the ways of thinking they represent also have a political dimension. Historically western imperialist powers had an essentialist, universal view of their ideas and values : colonial powers assumed there is one way of doing and seeing things, and sought to imose those views on cultures across the world. Western thought based on science, logic and reason - was privileged at the expense of other ways of thinking and this became a fact of the subaltern's oppression

Thought America is a Postcolonial nation, having liberated itself from British rule in the eighteenth century , it is still associated with colonial attitudes and modes of colonial tyranny. In modern Postcolonial writing the magical can be a way of challenging that tyranny ; it can be employed to integrate that history of exclusion.

To some extent this is Morrison's purpose in Beloved . For Morrison it becomes a way of reclaiming history .

The magical elements of a novel like Beloved offer an implicit challenge to the dominant modes of thinking. and a way of exploring aspects of the black experience that have previously been suppressed or overlooked . One example of this in how Morrison uses Beloved, to explore the forgotten history of the Middle passage, which is a term used to describe the transportation of Africans to their place of enslavement:

Introducing a magical character with a narrative voice, Beloved distorts the traditional conception of reality according to Eurocentric definitions . Moreover Beloved becomes the medium through which victims of the Middle passage gain a literate voice. This functions as a narrative strategy of transgression since it allows for the voices of the under - or unrepresented. In this way Beloved can be understood as a writing back from the periphery. ( Mehri Razmi and loyli Jamali)

The Middle passage experience in African American history is under- represented and Morrison uses her ghost character to remedy this shortcoming, as some see it, Beloved ( the character) becomes a vehicle for collective memory in the book, magically transformed into someone who witness and articulates the honor of a slave ship crossing, her story filling some of the gaps that realism has left.

As a magical character Beloved can be more than one thing, she is murdered daughter, a captured slave, an abused women, ghost an corporeal being ; she is simultaneously dead and alive, rather like the traumatic history she symbolizes : just as the Middle passage is a fact of history that is inadequately remembered, so beloved is a phenomenon that the Cincinnati community has practically forgotten by the close of the story. 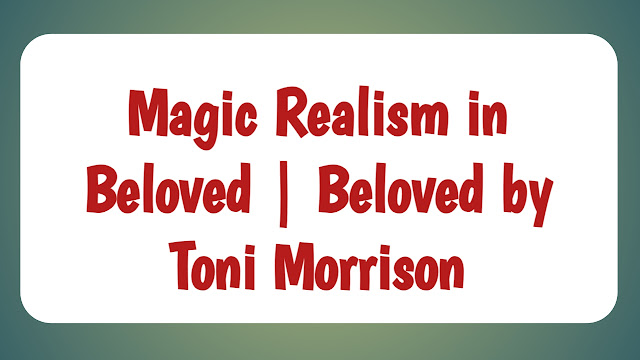 So the Magical elements of Beloved can be seen as political as well as a literary strategy when viewed is the context of black people's history of oppression and marginalization.